I got into his comics a few years back (let’s be honest, it was more than a few. It was the Bush (#2) era), bought a couple of his books at the Anarchist Book Fair and a library reading, read them and reveled in their awesomeness, and then, naturally, got distracted.

The Complete K Chronicles is a compilation of a few books and weighs in at 510 pages and contains strips from 1993 – 2004. Knight Takes Queen is a single book and was published in 2014. They’re both so good!

Knight has a really exciting and unusual ability to mix politics, potty humor, and pure heart– for example, he’ll be writing about violent racist cops in one panel, and the joy of yummy food in the next. Oh, and you’re laughing for both (even though sometimes it’s an LOL!, and other times it’s a resigned, head-shaking omg he’s so right, ain’t that tragic kind of laugh.

We should totally support rad cartoonists; of course check your library (and check the items out! Shelf-sitters (i.e. books that don’t get checked out) often get weeded when library shelf space is limited! Do your part to keep good stuff in the libraries)– but also buy his books and art! You can most easily do this on his website (which also has more comics!).

Elisha Lim draws attractive comics of cute queers, and often pairs them with poignant hand written text. Their style is super-distinct; if you’re like me, you’ll look at the pages and realize ohhhhhh that’s who does does drawings i’ve been seeing around…

I didn’t read 100 Crushes straight-through, I instead read it in chunks between other bits of reading. It’s a nice combination of heavy, light, and random.

Get a copy at the library or buy one!

Book Review: Tell it Like it Tiz by Nicole J Georges and Marc Parker 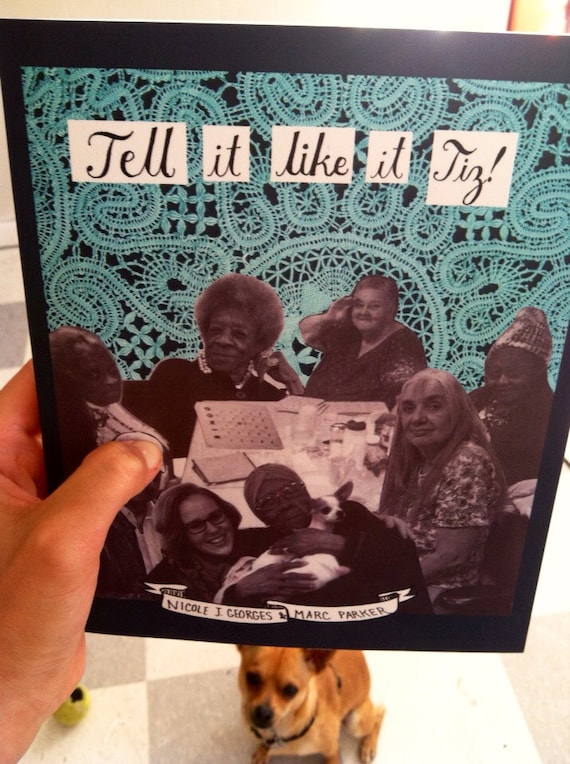 Tell It Like It Tiz is a zine by Nicole J Georges and Marc Parker about what goes on when they do zine workshops at a senior center in Portland Oregon.  This is a really fun and engaging anthology of a few of those zines. It’s chock full of portions of life stories, great advice, questionable advice, sayings from another time, fresh outlooks on universal life experiences, animal drawings, transcripts of conversations…

I love, love, love it. You’ll probably love it too.

Book Review: Bad For You- Exposing the War On Fun

Bad for you : exposing the war on fun!
By: Kevin C Pyle and Scott Cunningham

AHHHH! This book is awesome!!!

The stuff that young people like has so often been vilified by parents, schools, and the mainstream media. And the vilification had been fear-driven, over-the-top, and totally needless.

Bad For You combines well-compiled history, alluring illustrations, smart one-liners, nicely drawn comics, and really excellent research that points out contradictions and nicely shreds historical fear mongering  about all kinds of stuff including comics, video games, play grounds, and zero tolerance policies. The whole of the piece is a testament to the historical and present American mistrust and mistreatment of youth– it’s totally great. I read it straight through.

Blast from the past!

If you’re not familiar with Keith Knight, his work is totally awesome. I have a few of this books which I totes love, and I recently picked this one up at the library since I hadn’t read it before.

Published in 2004, it’s basically political comics from the thick of the Bush era. They’re spot-on to how things were at the time.

My first thought was Whew! Thank goodness we’re under a new regime, shit was so fucked up then! And then I realized that we’re basically still at war, we’re still crowded by racism that’s institutional AND and home-born, government surveillance has been proven (hiya NSA), and everything is now so connected that there’s a pretty serious chilling effect over activism and free speech. People’s passion is gone. Remember when everyone was going to rallies all the time, and it wasn’t considered in bad taste to critique the gov? But basically, other than the demise of MJ and the mass-forgetting of a few public figures’ names, the book’s still hella relevant. Buy his other books (this one’s sold out) or check this one out!

Ooh a book: “I saw you : comics inspired by real life missed connections”

Tons of cartoonists you like + tons of missed connections ads = really exciting interpretations of strangers’ actual lives! This is a nice (&varied) comic anthology that will keep you amused for a few long, rainy bus rides. It might get a little awkward when the perv next to you is arching his neck over to see what you’re LOLing at, but whatevs.

It’s a similar concept to Ellen Forney’s Lust, but it’s less of a coffee table book and more of a read-y book.

For reals, check it out.

Zines and Comics, oh my.

I feel like a little bit of a jerk for so rarely giving comics and zines their own posts. But the thing is, I tend to read them between and along side bigger books, and so they kinda pile up on my table after I’m done, and I have a hard time getting around to writing reviews for them because I’m already reading something else and too lazy… Maybe that’s a crappy excuse. But I want it on the record that I think that comics and zines are just as important as books. Sometimes even more important because they’re saying stuff that isn’t always marketable to mass audiences.

I’ve only read 3 Truckfaces (see other mention here), and they’re hard to find online and it’s sad because I totally want more. Truckface is a fantastic fat little perzine that LB writes about teaching in public high school in Chicago. Ack, they’re packed full of good though provoking descriptions of teacher strikes and issues of the real world reflected in classrooms, and how fucked up implementations like “no child left behind” are. Not interested in teaching at this moment? It doesn’t matter. LB will make you see how it and the education system all tie into the wider world.

Find them both (along with lots of other awesome stuff that I want) at Ms Valerie Park Distro while they last!

Invasion of the Dykes to Watch Out For by Alison Bechdel

Omg, I had forgotten how totally great this comic was. When I was a teen, the strip was in the lesbian weekly (which I devoured), and the books were some of the only non-erotica queer books by women that could be found at the local gay-friendly indie book store I devoured it, and the characters were a decently sized fraction of the queer culture that I was absorbing. Bechdel recently got more famous for her memoirs (Are You My Mother and Fun Home), but I want to remind my few readers and accidental Googlers that  Dykes To Watch Out For is a freaking awesome comic that confronts all sorts of stuff in a really awesome way: corporate america, politix, gender roles, unintentional hypocrisy,  human habits, relationship un/conventions and more (and duh, is fun to read).

Find a copy at your library, or ask for it at your local indie book store (if you don’t buy things there but can technically at least kind of afford to, then you’re not doing anything to stave off its inevitable demise… I realized this recently and bought a bunch of stuff at Dog Eared Books)

Book Review: Blaze (or Love In The Time of Supervillians) by Laurie Boyle Crompton

Blaze, named after a comic book character by her dad, is a teenager with a lot of responsibility.

Her dad skipped town to become an actor, her mom works extreme hours as a nurse, and as a result, she’s in charge of taking care of the house, cooking all the meals, and transporting her little brother and all his soccer teammates to and from their games. Her solace? The collection of comics that her dad left behind– and the comics that she draws herself.

The story begins with a crush that she has on the teenage coach of her little brother’s soccer team– and that crush oozes into something bigger– then that something mutates, and hell breaks loose for a little while, then there’s a personal transformation, and things kind of get back on course (but also change) due to a creative solution…

Fans of superhero comics will probably appreciate all the superhero references (they went over my head), as well as the comic-like pacing and structuring of the heroine (she’s likable and creative and flawed and interesting)  and the story. There were some unbelievable elements– but hey, it’s a story, not an attempted snapshot of reality.